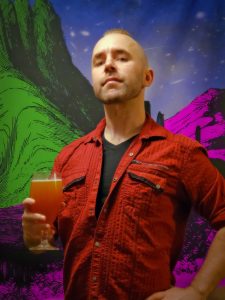 Mutantis Brewery & Bottle Shop was founded in 2019 by Jason “Igliashon Jones” Yerger, often known as “Igs” by those who appreciate brevity.

Born and raised in the San Francisco Bay Area, Igs developed a passion for craft beer while earning his philosophy degree at UC Santa Cruz.  He initially took up homebrewing after learning about ancient unhopped herbal beers known as “gruits”, but after learning the hard way about the unpleasantly bitter and vegetal flavors of a lot of those old brewing herbs, he decided to shelve the brewing equipment and focus on other hobbies.

Diagnosed with celiac disease in 2008, shortly after his 25th birthday, Jason soon came back to homebrewing, in a quest for better gluten-free beer than he could find at the time.  His gluten-free experiments faired much better than his earlier hop-free experiments, and before long his passion had become an obsession.  Documenting his experiments on his blog, as well as the Homebrewtalk.com gluten-free forum, he eventually caught the attention of a brewery-in-planning in Seattle, WA.  Throwing caution to the wind, Jason signed on as a founding partner and brewmaster, and moved up to Seattle in 2013 to get the brewery off the ground.

Five years later, with the brewery now distributing to many states and with several GABF medals to its name, Jason decided to leave the company to pursue smaller things.  He relocated to Portland, OR—the global epicenter of gluten-free craft brewing—and swiftly got to work on starting Mutantis, where his whimsical brewing experiments will be right at home!